"To be informed means secure"


"Our work in the field of anti-human trafficking began in 2006 and every year this direction of our activity is gaining new and new momentum" - Maxim Studilko, the founder of the camp "Forward and Up", begins his story. 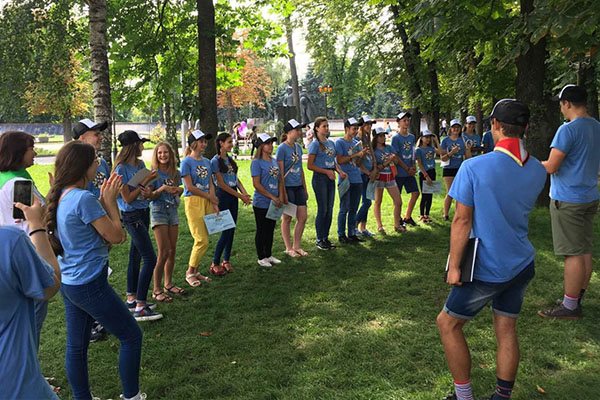 Considering the situation formed at the beginning of 2018, about 50 residents of Vinnytsia region received the status of persons suffered from human trafficking.

This indicator is the highest one among all regions of Ukraine.

"Adults get into unpleasant situations are responsible for their actions themselves, but teenagers are also at risk, especially students of vocational schools. The idea of the camp appeared after many years of work, because the camps allow young people to really open up and to master the practice of safe life behavior thanks to experienced specialists. "- the project coordinator briefly tells about the creation of the camp.

As according to the survey, about 60% of all victims have vocational technical education, as a result vocational school students are included in the category of young people who are most vulnerable to getting into situations involving human trafficking and human rights violations.

One of the ways to prevent getting to situations of human trafficking is an active outreach and awareness-raising work. The quality of such activities is achieved through informal communication between young people and with qualified coaches, experts, and specialists.

After conducting informational and educational activities, potential leaders of opinion, active teenagers are selected for participation in the camp "Forward and Up".

“I really like projects of “Spring of Hope” as each of them supports Global Sustainable Development Goals. So, the project "Forward and Up" supports 3 Global Development Goal of UN “Good Health and Well-being” and 16 Goal “Peace, Justice and Strong Institutions". During the project, participants had the opportunity to develop and improve themselves; this would support their health and well-being. Thanks to the cooperation of young people and the police in combating human trafficking and in the direction of community policing, the camp participants are imparted with the values of justice and strengthening of relevant national institutions”- the project volunteer Olena Matko says.

"We built a camp program in such a way that it contains informational, educational, creative, psychological, sports, tourist, leadership and practical units"- the camp's administrative director Andriy Babych says.

The camp also attracted police officers who conducted outreach and awareness-raising work for young people on anti-human trafficking issues and the direction of community policing. It helped to increase young people's trust in law enforcement and raise awareness of young people in anti-human trafficking issues and improve interaction with specialists of the renewed Ukrainian police". After implementation of this year's project, from 20 teenagers participated in the camp, according to the results of the survey, 90% showed improved knowledge of migration processes. 100% of participants have positive changes in personal development, increasing self-esteem and creativity. One of achievements of the event is the involvement of specialists from various police departments and their effective stay with children for a long time. Informal communication with police officers disclosed police functions in different department to teenagers, gave an understanding of the role of the police not only as a punitive body, but primarily as a service, aimed at informing, assisting and protecting.

Tetyana Nazaruk, a camp participant, underlined these statements: “Forward and Up” was incredible, so many interesting activities, new people and many positive emotions. I am grateful for a good time to the camp. I remembered most of all the obstacle course, organized by the military police. There was a real equipment, it was so realistic, and at the end of the obstacles they blew colored smoke - it was incredible."